I haven't updated my blog for quite a while, so I decided to update the people out there on what's going on with my life. Not a lot of exciting stuff...my boyfriend moved to a loft in downtown, bought my cousin's book, Sanctuary (her blog here), worked on my business plan, and worked on my culinary skills (I'm getting better!). Not much happened in my life, same stuff only on different days.

I'll be posting pictures of my New York trip soon, so watch out for that. I haven't had the time (or the motivation) to get to it. I'm a procrastinator, I always have been. I'm not proud of it, I just acknowledge it. I don't even know why I do it. Sooner or later I still get around to doing it (whatever it is I that I decided to do later rather than now) so I don't know why I even bother to procrastinate. It certainly serves no purpose. Who knows?

Anyway, I'll be starting school again tomorrow. Yes, big surprise. I got my degree in Economics from USC in 2003 and I'm back in school to punish myself with some more schoolwork and some more procrastination. Well, at least it's something to pull me away from the couch. To all of you who don't know me, I'm also a couch potato. A procrastinator and a couch potato...hah! It's a damn miracle I'm not fat but don't let me get into that. I have a slight obsession with my weight. Don't worry, I'm not anorexic or bulimic but I am very diligent about watching my weight. I haven't had pizza in about a year, and boy do I miss it! Almost as much as I miss the gym. I haven't been to the gym since my car accident. That's one of the reasons that I have to watch my weight, I can't do any strenuous exercise that might aggravate or impede the growth of the bone on my forearm. Almost a year, and it still hasn't grown back completely. But I won't get into that either. Talk about going off on tangents. My AP English teacher in high school told me that I write in a stream of consciousness...almost like James Joyce. Only the stream of consciousness part. Anyway...
Posted by sumnboutme at 10:40 PM No comments:

I found some pictures of my arm as I was rifling through the pictures on my cellphone. These pics are kind gross. 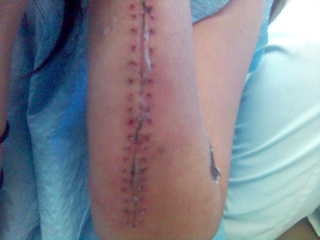 The staples were just removed by my doctor. The wounds look so fresh. Euw. He was trying to distract me by talking to me about the beach while he picked them off. I was screaming so much...I hope I didn't scare his other patients. This pic was taken with my camera phone because I'm such a doofus that I forgot my camera at home. Imagine how this would look if it was a higher quality picture. Double euw. 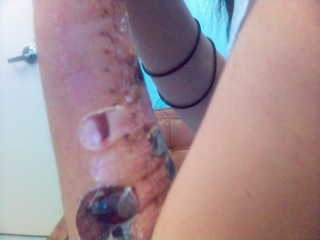 This pic is of the other side of my arm. this one's even more disgusting because of the burn marks. Burn marks you ask? Apparently, I'm allergic to surgical tape. This part of my arm had the staples taken off earlier* and the stitches were held by surgical tape so it won't open. When the doctor removed the bandages, I thought the scabs were dried blood but they were actually burnt skin. Say it with me...EUW!

*I had two separate surgeries for my arm. After the first surgery (where they installed the metal plates), my arm was so swollen that they couldn't close it off. I went back a week after to first surgery to have my arm closed up and for a bone graft (there was a gap in my bone since it apparently shattered and some pieces were too tiny to be put back together). Before I had my second surgery, the doctor removed the staples. Since the wound was pretty fresh, he taped up my arm with surgical tape so the wound won't reopen.
Posted by sumnboutme at 4:36 PM No comments: